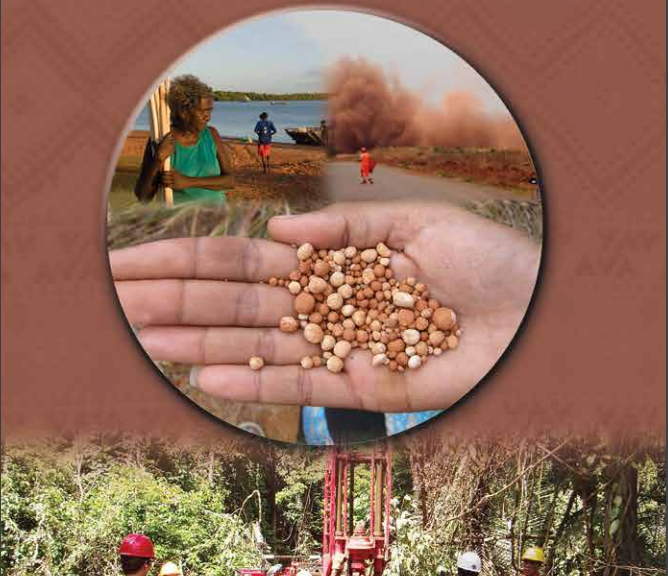 View / download pdf version: Mining the Aluminium Industry and Indigenous Peoples
Global demand for the world’s most popular metal – aluminium – continues to rise, making it is increasingly critical that the aluminium industry address its environmental and social impacts, particularly in indigenous peoples’ territories, according to a new book published by Asia Indigenous Peoples Pact (AIPP), Forest Peoples Programme (FFP) and International Union for Conservation of Nature (IUCN).  The book, edited by ENIP members Cathal Doyle, of Middlesex University, and Helen Tugendhat, of Forest Peoples Programme, in conjunction with Robie Halip, of Asia Indigenous Peoples Pact, was launched at the UN Forum on Business and Human Rights in Geneva this November.
With many of the world’s bauxite mines, and the rivers used to generate power for its processing, located in or near indigenous peoples’ territories, the book seeks to highlight the need for the aluminium industry to ensure the rights of indigenous peoples are respected and protected, as outlined in the UN Declaration on the Rights of Indigenous Peoples.
This important and timely book entitled “Mining, the Aluminium Industry and Indigenous Peoples: Enhancing Corporate Respect for Indigenous Peoples’ Rights”, provides a global overview of the challenges facing indigenous peoples, presenting five case studies from Australia, Cambodia, Guinea, India and Suriname of indigenous peoples’ experiences.  The case studies reveal that indigenous communities are affected by primary production activities, such as mining and associated infrastructure (Australia, India, Guinea, Suriname), and by secondary processes such as smelting and energy production used to sustain operations (India, Suriname).
The publication is intended to inform the Aluminium Stewardship Initiative’s new voluntary industry standard, which requires certified companies to adhere to key principles concerning the rights of indigenous peoples, including obtaining their Free, Prior and Informed Consent (FPIC) “where new projects or major changes to existing projects may have significant impacts on the Indigenous peoples associated culturally with and living on the relevant lands.”
“The lack of respect for indigenous peoples’ rights particularly to their lands, territories and resources, and to decide on the development that they want, is found in all stages of the mining and hydroelectric projects — from initial project planning to concession insurance, operations and project closure. In areas where there is an ongoing conflict, these injustices are often magnified,” said Joan Carling, Secretary General of AIPP.  As highlighted in this book “indigenous communities must be able to define the terms and conditions of their engagement with the industry as well as develop their own technical capacity.”
FFP Director Joji Cariño added: “As many indigenous territories are located in areas of rich biodiversity and natural resources, governments have often neglected indigenous peoples’ rights in the name of externally defined ‘national interest’, which makes the ASI’s inclusion of a requirement to obtain the consent of indigenous peoples particularly welcome. Going forward, governments must create a more secure, enabling environment that supports the right of indigenous peoples to self-determined development, including full control over sub-soil resources and full participation in any discussions regarding the development of such resources.”
This book underscores the serious challenges facing the aluminium industry – and mining in general – by examining its historical legacies with regard to indigenous peoples and identifying some positive steps that can be taken across the sector,” said Giulia Carbone of IUCN, which also contributed to the study. “By creating a consistent approach to indigenous peoples’ rights, the ASI Standard can help companies improve their environmental and social impacts in areas that are most at risk.”
For more information contact Cathal Doyle at doncathal@gmail.com or Helen Tugendhat at helen@forestpeoples.org.