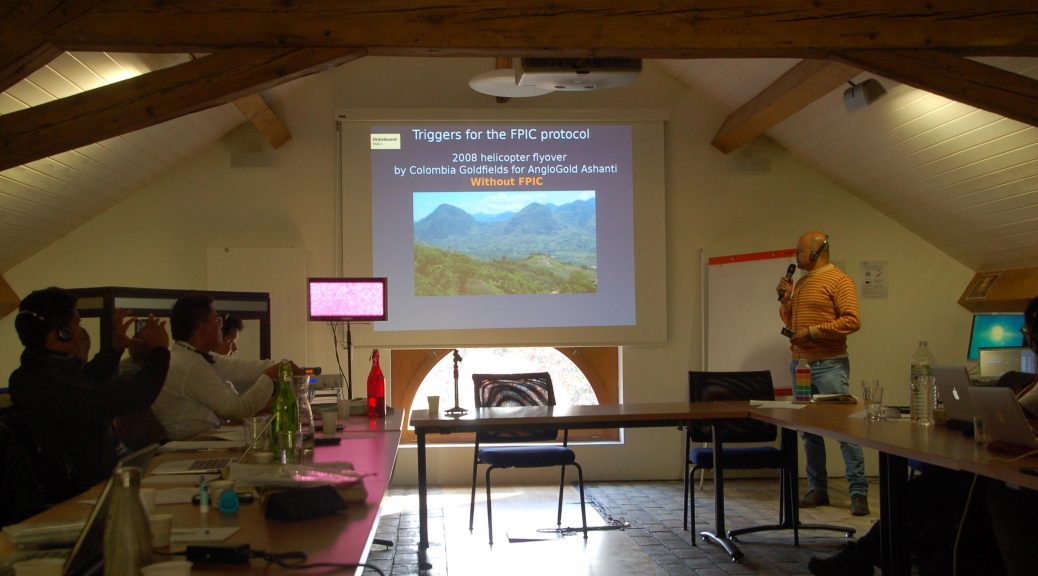 There is a growing consensus that extractive industry activities, such as mining or oil extraction, affecting indigenous territories should not be carried out without their Free, Prior and Informed Consent. The affected community must receive all information relevant for their decision and must be freely able to give or withold their consent. The procedure for negotiating consent must be in accordance with the community’s customary law. This is a consequence of the right of indigenous peoples to self-determination, as articulated in the 2007 UN Declaration on the Rights of Indigenous Peoples.

In some countries, FPIC has been a legal requirement for years, for instance it has been required by the Philippines Indigenous Peoples Rights Act since 1997. However, legal texts and corporate practices often have little to do with the spirit of FPIC, reducing it to a mere box-ticking exercise. What the reality looks like, and what it should look like, is the theme of a project ENIP has undertaken in a GIZ- sponsored project. As part of the project experts, including indigenous peoples from countries such as Peru, Colombia, the Philippines and Malaysia, came together in Geneva in November 2018 to discuss these issues.

Outside of national laws or guidelines indigenous peoples have been been increasingly developing and devising their own FPIC protocols as a means to defend their rights. These protocols describe their customary decision-making practices which should be used in FPIC negotiations. By providing clarity on decision-making processes they enable states and businesses to better protect and respect the rights of indigenous peoples. Many protocols are “living documents”, and vary greatly in their level of detail. They often reflect the predominantly oral cultures they emerge from.

FPIC as a binding principle

At the international level the state duty to obtain FPIC is enshrined inter alia in the UN Declaration on the Rights of Indigenous Peoples, the International Labor Organization’s Convention 169 and standards such as the World Bank IFC Performance Standard 7. It also increasingly features in codes of conduct by industry associations, such as those by the International Council on Mining and Metals. Most Latin American countries, including all the ones that presented workshop cases, have signed ILO Convention 169 and have thus committed to realizing the right to FPIC. But often what is promised and reality diverge widely.

Exchange of experiences in the workshop

Under the project, a workshop was held before the 7th UN Forum on Business and Human Rights in Geneva on 24 November 2018, attended by representatives of various indigenous organisations and peoples from Latin America and Asia. The workshop reviewed the subject of FPIC protocols, exploring the content of some key protocols and how they worked in practice. The overall goal was, through a shared understanding of the cases presented, to identify how FPIC protocols works, how they could be improved and identify how to better networking between different peoples and organisations working on this topic. After an introduction to the project by Dr Cathal Doyle of Middlesex University, four case studies were presented.

Realizing FPIC in a violent Colombia

Hector Jaime Vinasco and Viviane Weitzner shared the experiences of the Embera Chami people in Colombia. Living in a mountain region with rich gold deposits, the Embera Chami have many rights on paper, which are often disregarded in practice. The biggest problem is the continuing armed conflict, which has given Colombia one of the highest rates of internally displaced persons in the world. As in so many other places in Colombia, the community are caught between the violence of right-wing paramilitaries and left-wing guerillas. Partly as a result of a desire to access their natural resources, including gold, the people are being subjected to wide-spread harassment and extra-judicial killings. Viviane Weitzner pointed out that although it is officially a post-conflict situation, a de facto state of war persists, which is obviously a huge obstacle to the implementation of FPIC protocols.

Yet desite this, a Constitutional Court decision has formally reaffirmed the community’s right to internal autonomy. As a result the community are currently developing autonomous regulations for mining activities within their territory, are working to limit urbanisation and have officially declared their territory GMO free. They have developed an advanced FPIC protocol for projects which would impact them, and have created an ‘indigenous guard’ to patrol their territory monitoring against unauthorised incursions.

Dams and mines resisted in Brazil

Bel Juana and Biviany Astrid Rojas Garzon from Brazil presented via Skype the protocol developed by the Juruna people living in Mato Grosso del Sur in Northern Brazil. This FPIC protocol was developed after companies repeatedly disregarded their right to be consulted. In particular, the long struggle around the Belo Monte Dam, which in 2016 became operation despite worldwide protests and court decisions, has moved the Juruna to make explicit their own decision-making rules. Currently, the Juruna are affected by the gold mining company Belo Sun. However, following a decision by a federal court, the project was terminated and the license revoked until the company complies with the indigenous laws found in the Juruna Protocol.

It is not yet clear what the election of the right-wing politician Bolsonaro as President of Brazil will mean for this case. His remarks condemning indigenous rights before the election cause concern.

Establishment of ICCAs in Malaysia

Gordon John Thomas, working with PACOS based in Sabah, Malaysia, talked about community practices, customary law and spirituality. In Sabah, traditional knowledge is usually passed on orally, which is why it can be difficult to convey this knowledge to outsiders. As a result indigenous communities is frequently not included in decisions affecting them. Currently, there are plans to establish Indigenous and Community Conserved Areas (ICCAs), which contain protocols explaining to outsiders indigenous governance over the natural. It is hoped this will improve the situation of the communities.

Autonomy of the Wampis Nation in Peru

Grimaldo Sanchez and Tami Okamoto presented the situation of the Wampis nation in Peru. The indigenous Wampis communities have established an autonomous territorial government there to protect themselves against their rights, including the right to FPIC, being violated by companies and the government. The background is that Peru, as a signatory state to ILO Convention 169, has had a consultation law since 1994. In reality though it has limited the scope of the consultation so that no genuine indigenous participation is possible. While they expressly identify as Peruvian citizens, they place great importance in asserting complete sovereignty over their own territory. The Wampis provide an excellent lesson in how to achieve, and govern, their own indigenous territory, although they are in the early stages of creating an FPIC protocol to deal with outsiders.

The presentations were followed by an exchange on the different experiences and the challenges indigenous peoples face, as well as the transferability of the experiences of one people to the situation of other peoples .

Again and again the question came up as to whether and how FPIC is even possible in a stuation of armed conflict, as in Colombia and the Philippines. Windel Bolinget of the Cordillera Peoples Alliance considers a secure, free, democratic environment to be essential for developing and applying protocols.

He said: “So in our case, in developing or practicing our FPIC-protocols […] we have learned that if the state is undemocratic, a tyrant or totalitarian we can not expect that there will be an […] environment for us to practice our free prior informed consent, much less than recognation of our right for ancestral lands. And the government is undemocratic. So that means it’s up to the people to all organize and strengthen the people’s movement to be able to engage the strength.”- Windel Bolinget.

It was not all gloom though. Much progress has been made, and there was agreement that protocols are an important tool for building consensus in the communities regarding traditions and customary law as well as for improving the implementation of FPIC in practice. Although more work more needs to be done, it is clear that FPIC protocols are making a big difference to indigenous communities being able to assert their rights.