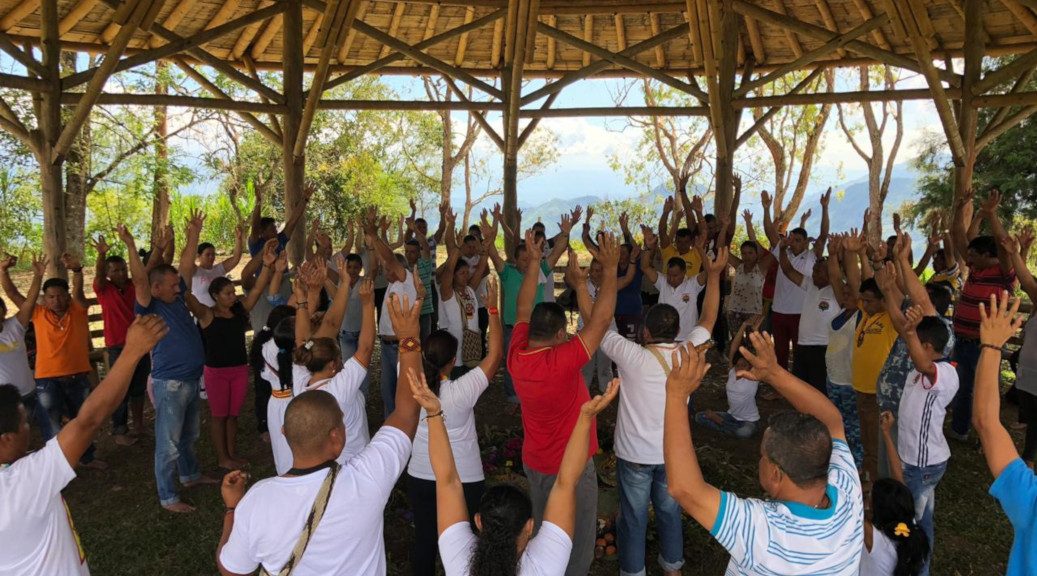 An emotive candle light commemoration for all the indigenous leaders and community members killed in the two years since the adoption of the Colombian peace agreement was held in the town square of Riosucio, in Caldas, Colombia on 7 December 2018. The chant of “for our dead, not even a minute of silence” captured the sense of abandonment the communities feel from a government intent on projecting an image of a peaceful country to attract extractive industry operations and investment by foreign companies or investors, while failing to address the toll this is taking on indigenous leaders who are attempting to defend their territories and enable their peoples to live in peace and dignity. The chants were interspersed by songs and poems of resistance and hope for the future –

“In this serene night the wind carries a song,
the song of those who sleep covered in blood and tears,
their labouring hands trapped beneath the earth
their freedom, the dream of their grandparents”1
“We sing the hymn of resistance,
We carry words and thoughts
that pave the way for peace in our ancestral territories,
“mu buma” we are here and forever here we will be”2
– with young and old alike declaring themselves “the scream of those who no longer exist”.

As in many other parts of Colombia, the picturesque Andean mountain Indigenous Resguardos of Cañamomo y Lomaprieta, Nuestra Señora Candelaria de La Montaña, San Lorenzo, y Escopetera Pirza, home to the Embera Chamí in the municipalities of Riosucio and Supía, Caldas, have been victims to an alarming number of assassinations of indigenous leaders and community members in the two years since the conclusion of the peace process.3 Most killers are unknown, paid by unknown actors with interests in the Resguardo territories and their rich gold resources.

During his two-week mission to Colombia from 20 November to 3 December 2018, the UN Special Rapporteur on Human Rights Defenders, Michel Forst, met with representatives of the Embera and other indigenous peoples. He expressed his deep concerns at the sharp increase in killings of human rights defenders, with the Colombian Ombudsperson’s office reporting at least one killing every three days. The Rapporteur identified indigenous peoples as “among the most at risk groups of defenders working on economic social and cultural rights”.4 This reality was evidenced by the killings of 15 indigenous leaders and community members, of which four were members of the Embera Chamí communities, over the course of the Rapporteur’s short visit.5As of August 2018, the number of human rights defenders killed since the signing of the peace agreement was estimated to be between 343 and 462.6  ONIC, Colombia’s national indigenous organization, states that in the three-month period since the Duque government came into power in August 2018, there have been 35 killings of indigenous leaders.7

The latest assassinations in the Embera Chamí communities in Caldas consisted of the massacre, on 23 November 2018, of three members of one family in the Cañamomo y Lomaprieta Resguardo – Gabriela Tapasco, a woman active in social organizing in the community, her husband Serafin Diaz and her son Cesar Arturo Tapasco. This was followed 10 days later by the killing of Edison de Jesús Naranjo Navarro, the son in law of the current governor of the Cañamomo Lomaprieta Resguardo, shot by a motorcyclist at 8AM on 4 December 2018 in the San Lorenzo Resguardo. On 11 December 2018, the Colombian Ombudsman issued an urgent alert identifying risks to the lives of indigenous leaders in the Embera Chamí Resguardos due to the activities of members of the former paramilitary group Autodefensas Unidas de Colombia (AUC) who are now organized as the Autodefensas Gaitanistas de Colombia (AGC) and the Águilas Negras (Black Eagles), and activities of former members of the ELN.8 9

Sitting in the small meeting room of the cramped office of the Cañamomo y Lomaprieta Resguardo just two days after that most recent killing, surrounded by portraits of former Embera Chamí governors, four of whom were killed as a result of their struggles to defend their territory, I was moved by the bravery of those indigenous leaders who continue to advocate for the rights of their peoples despite death threats and attempts on their lives.

One such leader is Héctor Jaime Vinasco. A former governor of the Cañamomo y Lomaprieta Resguardo and Coordinator of its Natural Resources and Mining Program, Héctor Jaime is responsible for overseeing the implementation of the Resguardo’s own laws governing mining, a law-making ability that is recognized in Colombia’s Constitution and more recently by the Constitutional Court of Colombia in a landmark ruling in 2016,10 which also recognized the Resguardo’s territorial title and its colonial origins. Because of his active role in defence of the Resguardo territory, Héctor Jaime has faced multiple death threats over the course of the past decade and has seen his friends and mentors killed. Like several leaders across the country, he is the beneficiary of precautionary measures, and travels with three bodyguards in a vehicle paid for by Colombia’s National Protection Unit. “Colombia is not a post conflict country,” Héctor Jaime explains when asked about the context that gives rise to this violence against indigenous peoples.

“We still live with the impacts of internal armed conflict on a daily basis. The rich natural resources in our ancestral lands continue to be besieged by external interests, ranging from extractive companies to outlawed armed actors, who in many cases use gold as a means to launder money obtained from drug-trafficking”.

At a personal level for Hector Jaime this harsh reality is reflected in the fact that for the past decade he cannot leave his home without the accompaniment of armed bodyguards. Over coffee, under the watchful eyes of his bodyguards, in Riosucio’s vibrant and colourful local market, Héctor Jaime explains that having a coffee or a beer in public places is something he has rarely done these past years. Without his bodyguards he simply could not stay in the Resguardo, and he is not willing to contemplate leaving his ancestral lands. The threats to his life have been continuous and repeated over the years, he has no privacy and he cannot even relax when he in his own home. As he explains:

“at night it’s not even safe for me to even go out of my house to feed the dog. I feel like a prisoner in my own home.”

Héctor Jaime could leave the area and live a peaceful life with his family elsewhere, far from the Resguardo, but his commitment to the Embera Chamí struggle to defend their territory is absolute.

The positive results of this struggle on the part of the Embera Chamí are evident throughout the Cañamomo y Lomaprieta Resguardo. They are reflected in their autonomous legal frameworks governing both activities and the presence of external actors within their territories. They are also evident on the ground. Trees have been planted to help protect the territory and restore its eco-systems; Resguardo land has been reclaimed from landlords and ranchers, and land has been secured to limit further urbanization encroaching on community land; the Resguardo has declared itself a GMO-free zone and its seed banks provide one of Colombia’s few sources of guaranteed GMO-free seeds; indigenous guards train and mobilize to protect their territories from outside threats; sacred places have been protected and ceremonial buildings constructed; ancestral mining has been protected from large scale mining concessions and important legal victories facilitating further realization of territorial, natural resource and self-governance rights have been secured.

All of these are momentous achievements when viewed against the backdrop of constant threats to territory and life that are a daily reality in indigenous territories in Colombia.11 At the same time, significant challenges remain to strengthen Resguardo self-governance, to protect the entirety of its territory, and to guarantee the model of development chosen by the communities. Not least among these challenges is the ever-present threat to the lives of the Resguardo leaders and community members.

Almost everyone has a story to tell of how the killings and the terror they cause affects them. Some community members lost their entire families during the armed conflict – killed either by members of the military or right-wing paramilitaries because they were suspected of supporting the FARC12, or by the FARC because they were suspected of supporting the paramilitary groups. A thirty year old man recounted how, on an almost daily basis,

“during the conflict my classmates and I discovered dead bodies in the Resguardo on our walks through the mountains to school. Nowadays its more likely there is a killing once every week or two in this or the surrounding Resguardos. You come to expect it, and when you don´t hear of a killing for a while you start to think that something really bad is going to happen”.

Another man explains how the mere sound of an approaching motorbike can generate fear on his night time walk home. An indigenous woman echoes these perspectives and explains that in the new “post-conflict” era, while the open combat and bombing have stopped, the terror remains:

“In the past you knew who was doing the killings. Now indigenous leaders and community members are killed, and nobody knows why or by whom. They say we have peace, but we have no tranquillity in our own homes and territories”.

Colombia’s increasingly conservative political establishment, which presents extractive industries as the solution to the country’s economic woes, remains wilfully blind to, or unconcerned by, the enormous risks this poses to the survival of many of the country’s indigenous and afro-Colombian peoples and more immediately to the safety of their leaders. The extensive coverage of indigenous territories by large-scale mining concessions, agri-business plantations, infrastructure and tourism projects, all granted or established without meaningful consultation or consent, the presence of illegal mining, drug-traffickers and the remnants of armed groups in their territories, creates a volatile environment in which those who challenge these interests are inevitably targeted and killed.

The Special Rapporteur highlighted the disproportionate impact of the armed conflict on indigenous peoples and the intrinsic link between the defence of their lands and environment and the on-going threats they face in the context of mining, agribusiness, energy, infrastructure and tourism projects. He welcomed “the inclusion of an ethnic chapter in the Peace Agreement, [and] the increased recognition of indigenous jurisdiction and their autonomous governance systems” but noted that “ensuring its swift and effective implementation is imperative for their protection”. He also “strongly encourage[d] the Colombian authorities to guarantee the right to free, prior and informed consent” stressing that “consultation processes should be meaningful in order to guarantee the protection and respect of the rights of indigenous communities, in full compliance with United Nations Declaration on the Rights of Indigenous Peoples.” 13

In response to the latest killings the Cañamomo y Lomaprieta Resguardo’s authorities have repeated their demand for effective investigations and punishment of those responsible, calling for:

Unsurprisingly, given the almost complete impunity of the perpetrators, there is little faith in the State´s willingness or capacity to investigate these killings or hope that they will stop anytime soon.

Arnobia Moreno Andica, the current Governor of the Cañamomo y Lomaprieta Reguardo, whose eldest daughter lost her husband to the latest killing in the Embera communities, echoed the feeling of many in the community:

“it’s extremely painful. We don´t understand how or why people can do this. It causes huge suffering in our communities, but we have to continue our struggle.”